After months of work, all of us at BeWildReWild have experienced a strong sense of satisfaction with the progress we’ve made on several efforts. The progress allows us to communicate our message – the need for we humans to trust natural processes and to recognize that the foundation of our own successes is the success of those natural processes. Everything we humans have invented has precedents in the human world, including concrete (crayfish towers, bald-faced hornet nests), electronic communication (some fish), water pumping against gravity (all vascular plants), and much more.

We are based in Iowa, the most altered state in the lower 48 states of the US, and possibly in all of North America. The changes have happened because of our fertile soils and growing urban areas, all signs of success by the usual economic and social measures. But the changes have come at a tremendous cost that cannot be continued even into the near future. This disruption is happening because of changing weather patterns (climate), dwindling resources, and growing human needs.

Our message is a positive one: nature will win in the long run, even if the long run consists of millennia or geologically long periods of time. This asks us to look well beyond our own lifetimes and well beyond the length of recorded history. In the meantime, what can we humans do to facilitate the survival and flourishing of nature?

Two new developments spur our imaginations and actions. We hope you are similarly inspired. First is the posting of a layered GIS map to our web site. The map is the result of much effort on the part of Nitin Gadia, an expert with GIS mapping systems. Given our goals to include the entire Mississippi-Missouri River basin and focus on Iowa as “Ground Zero” because of its biological fragmentation, Nitin has created a map that illustrates these elements:

Nitin’s map is at this page: https://bewildrewild.org/projects/big-river-connectivity-maps. Click on the red “View Map” button and just play around with its features until you become comfortable with it. Then look at the potential cores and corridors that appear in it.

I undertook my own mapping effort that met with problems in putting on the web, but in the process I learned a lot about reading aerial imagery to find likely cores and corridors. Using resources such as the Iowa Wildlife Action Plan (Iowa Dept. of Natural Resources), I could assign general ecological purpose to those cores and corridors, along with specific needs for endangered and threatened species. Here is one of the maps that resulted, showing how central Iowa might be connected southeast to the Mississippi River along the Iowa and Skunk Rivers and south to the Missouri along the Chariton River: 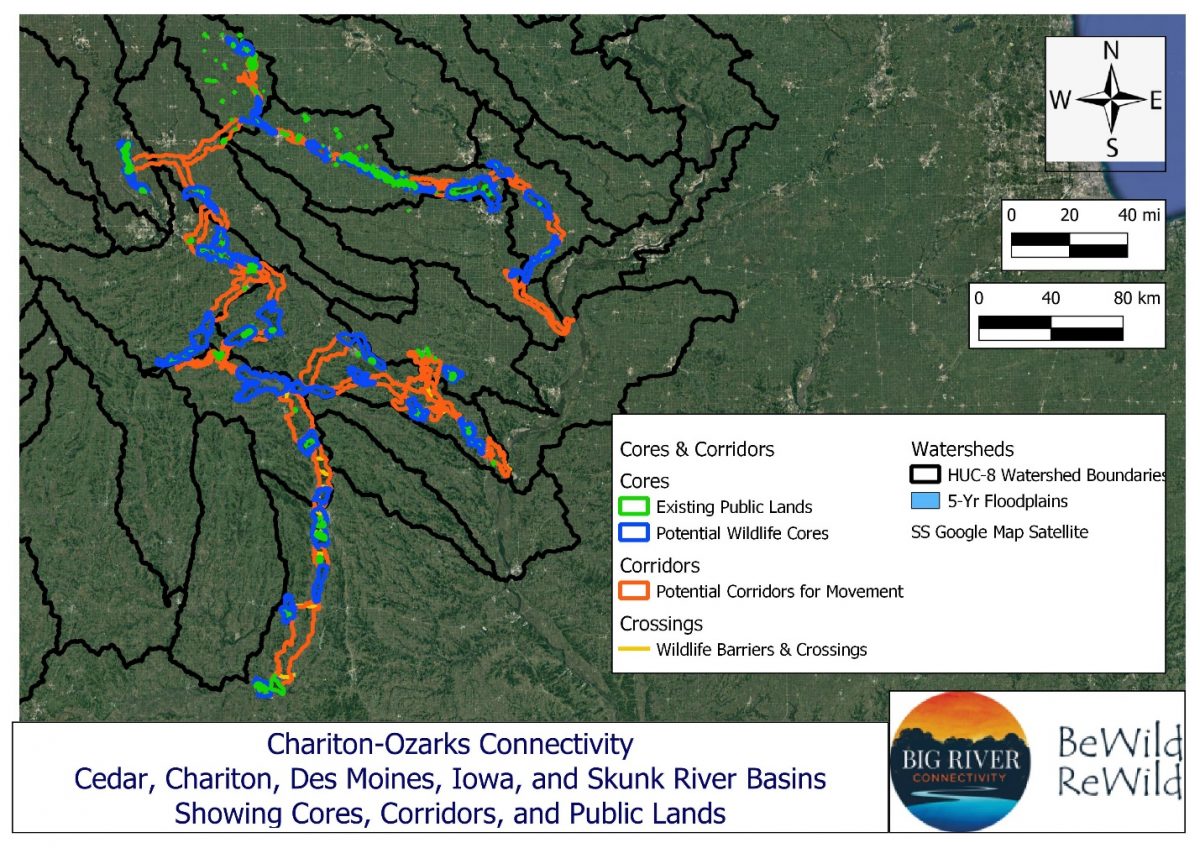 This, in turn, informed Nitin’s work. Our resulting maps are different because of different approaches and styles.

The second development follows from the mapping work. The maps brought to our attention the need for wildlife crossings as well as corridors. The built landscape – primarily roads and cities and towns – throws up obstacles to wildlife movement. If effective cores and corridors are to exist, many of these hurdles need to be overcome to make our land more wildlife-friendly.

As our thinking about crossings evolved, we moved from the abstract world of trying to map key sites for crossings to on-the-ground evaluation of existing road bridges, culverts, and rail trestles as potential crossings. Two bridges in Iowa were built with the purpose of allowing wildlife movement underneath. Both are on US Highway 20, one over the Iowa River in Hardin County, and the other over the North Raccoon River in Sac County. This photo shows the crossing over the Iowa River: 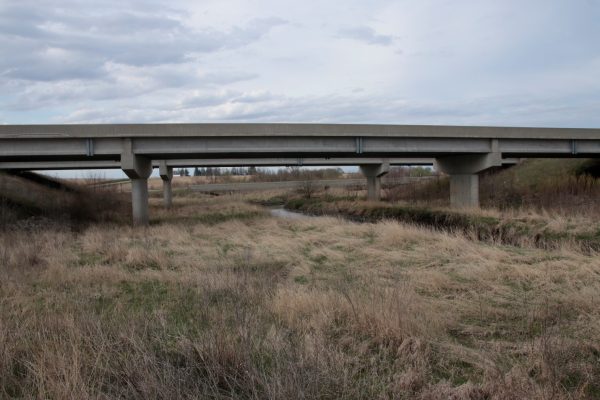 We are here, but where to now?

The next steps have taken us to presentations for face-to-face audiences, videos on BeWildReWild and Big River Connectivity, and a drive to get volunteers who will evaluate wildlife crossings in each of Iowa’s ninety-nine counties. These efforts are described at these pages at our site:

The last link invites you to volunteer in an effort to evaluate the existing wildlife crossings across Iowa. Mostly, these consist of culverts of varying sizes under roads, bridges of many sizes and purposes, and the roads themselves where wildlife are forced to move at danger to themselves and to us. The form of evaluation is a Wildlife Crossing Scorecard, and it is accompanied by a short video and instructions for safety and use.

We encourage you to try out the Scorecard, and if you are outside Jefferson County, Iowa, consider bringing together a group of interested volunteers who can coordinate a county-wide effort. The results will tell us where the most crucial gaps in wildlife connectivity are, and they will inform your – our – efforts to create a more connected natural landscape across Iowa and the entire Mississippi- Missouri basin.

Thank you for reading this and considering action on behalf of the wild world we inhabit. Comments are welcome on this and any other post in the BeWildReWild Forum.